Monitoring the electrical behaviour of a material is either a way to better understand its fundamental structure or a mean to enrich its microstructural/mechanical characterisation. These complementary approaches have been widely developed at SIMaP heading toward multi-scale and multi-functional characterisations of most classes of materials (metals, ceramics and semiconductors).

Enhanced nanoindentation: In-situ SEM and electrically-functionalised nanoindenter
In order to support the rising demand for innovative materials optimising functional and structural properties at small scales, an original multifunctional characterization tool has been developed. A commercial nanoindenter has been functionalised for electrical characterisations and integrated into an SEM (on the CMTC platform). This characterisation coupling allows real-time resistive-, capacitive- and piezoelectric measurements during fine mechanical testing. This instrument development has been funded by CEMAM.

Resistive-nanoindentation technique has been successfully applied to the continuous monitoring of the effective indentation contact area which is crucial for the quantitative computation of mechanical properties (hardness and elastic modulus). Capacitive-nanoindentation technique has shown to be an efficient tool for the local measurement of dielectric permittivity of thin films at low frequencies (2MHz). SEM integration allows the testing of small-scale objects, as well as the precise positioning of indentation tests on inhomogeneous materials (see image below). 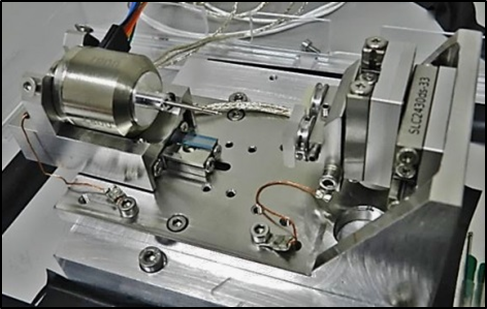 Video of in situ SEM nanoindentation

This axis aims to investigate the effects of surface chemical and structural modification on the mechanical properties of interfaces.
Surface chemistry and structure is modified trough different processes: chemical reaction, physical vapor deposition, or thermal oxidation. The mechanical properties of the interfaces so created is then investigated, particularly in terms of adhesion.
Such studies are based on specific experimental tools in terms of elaboration, such as an in house PVD equipment with in situ stress measurement method, and in terms of characterization, more particularly mechanical characterization dedicated to interface investigation (blister test, 4-point bending test). In parallel to experiments, modelling and numerical simulations coupling the physical, chemical and mechanical aspects are developed in order to improve the understanding of the mechanisms at work and obtain quantitative data.

Telephone cord buckles-A relation between wavelength and adhesion
Thin films with low adhesion and large residual stresses may buckle. The resulting morphologies are varied, but one of the most commonly observed is an intriguing oscillating pattern - the so called telephone cord - which has been extensively investigated in the recent years. We have studied the kinematics of formation of telephone cords using a geometrically non-linear plate model and mode dependent interfacial toughness, captured via a cohesive zone. Through extensive Finite Element Simulations, we have demonstrated a simple, non-trivial relation between telephone cord wavelength and interfacial toughness. To validate this prediction, highly stressed Mo thin films were deposited on Si wafers, with a well-defined interface and very reproducible adhesion. Studying the morphology of the resulting buckles for different film thicknesses and stresses, we observed a trend which was fully consistent with our simulation results. From the data fit, an adhesion energy of 0.58+-0.04 J.m2 for the SiO2/Ag interface was inferred, which compares well with literature estimates (see image below). 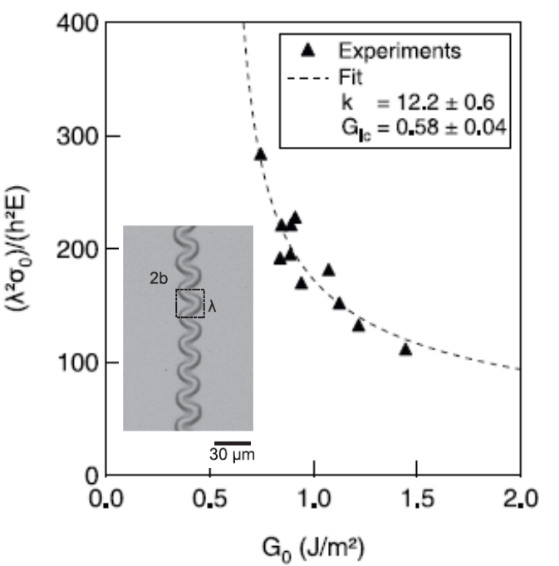 Frequency-tunable toughening in a polymer-metal-ceramic stack using an interfacial modular nanolayer
Composites engineered at the nanometer-scale are of interest in a variety of applications including energy, electronics and biomedicine. The performance and reliability of such composites are often governed by the integrity of interfaces between dissimilar materials during loading fluctuations triggered by thermal, electrical and mechanical stimuli. Thus, unearthing and understanding nanoscale phenomena at interfaces during dynamic stimuli, and manipulating them, is a key to designing new materials with novel responses for applications. The work published in Nature Communications shows that the use of a layer of molecules called "nanoglue" can facilitate unexpected mechanical hardening depending on the frequency. These results obtained at the Rensselaer Polytechnic Institute are the result of a collaboration of researchers from different fields of materials science, to which Mr. Braccini, CNRS research fellow at the SIMaP laboratory, participated as part of a stay with Professor Ramanath's team (see image below). 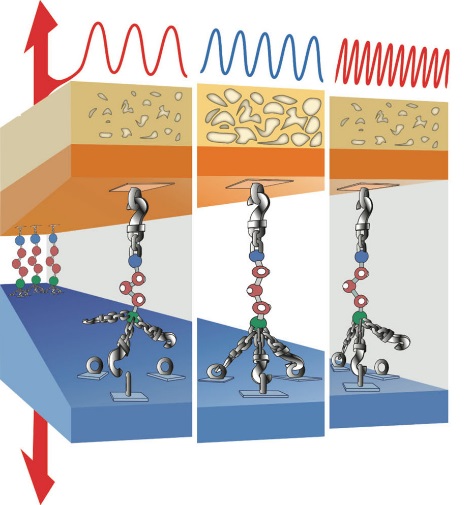